This research is being conducted by Jonathan Cowart for his PhD under the mentorship of Drs. Iske Larkin and Paul Cooke. Research to be completed in Fall 2019.

Current research focuses on studying multiple reproductive parameters in male Florida manatees including assessing normal gonadal function through immunohistochemical analysis, defining baseline information for semen parameters through objective computer-aided sperm analysis, morphometric and structural analysis of spermatozoa, and investigating phylogenetic relationships for these reproductive parameters between manatees, elephants, and hyraxes, which are closely evolutionarily related to each other. This research represents the first application of computer-aided sperm analysis, as well as semen characterization, for any sirenian species and will help establish reference points for future reproductive research. 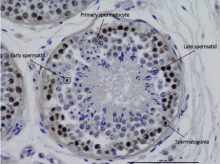 This research was conducted by Hilda Chavez for her MS-Thesis 2015 with Drs. Iske Larkin & Roger Reep

This research provided a gross anatomical and histological description of the male reproductive tract in the male Florida manatee with particular emphasis on the structure of the accessory sex glands and their potential relation to sperm competition in this species. The research conducted by Hilda added a much needed description of the reproductive tract to a pool of Florida manatee scientific literature that is significantly lacking when it comes to reproductive biology for this species.

Immune consequences of glyphosate exposure in fish and Florida manatees

This work is being conducted by Maite De Maria, PhD student, under the supervision of Dr. Nancy Denslow and Dr. Mike Walsh

Glyphosate is the most widely used non-selective herbicide in the world including Florida. The goal of this research is to study the consequences of glyphosate exposure in fish as an animal model and in manatees; with particular emphasis on the immunological component and exposure in both species. Ms. De Maria Mulet is utilizing the largemouth bass as an animal model to develop a biomarker for immune dysfunction resulting from glyphosate exposure. She is analyzing gene expression data to understand the immune consequences of exposure to this contaminant in largemouth bass in the head kidney. The head kidney functions as supra adrenal gland and lymphoid organ in fish. We are also developing in vitro assays to assess the immune consequences of exposure in manatees in which she will analyze the consequences of glyphosate on gene expression of immune cells. In addition, she is working on installing passive devices to measure the potential chronic exposure of manatees to glyphosate in four areas of Florida: Caloosahatchee River, St Lucy Canal, Crystal River, and the Everglades.

Florida manatees are also exposed to other environmental contaminants such as flame-retardants (per- and polyfluoroalkyl substances, PFAS) that have been detected in their plasma. We are analyzing the exposure to these contaminants and glyphosate in Brevard County and Crystal River. We are currently analyzing the gene expression patterns in the immune system exposed and non-exposed to multiple stressors manatees face from these two locations. We seek to identify the immune consequences and biochemical pathways of glyphosate and other contaminants in manatees and fish.