Dr. Rousselet completed her residency in Aquatic Animal Medicine at the University of Florida in 2017 and is currently preparing the Board in Zoological Medicine.  During her residency program she provided veterinary support for free-ranging marine mammal and sea turtle rescues and annual health assessments.  She had the opportunity to travel to Australia to work with Dr. Blyde (Sea World Australia and Australian Zoo) to be involved in treatment of rescued sea turtles, Australian fur seals and native Australian terrestrial fauna, including koala and other macropodes. Dr. Rousselet also provided veterinary care to a wide range of aquatic and terrestrial species during clinical rotations including the department of Zoological medicine at the College of Veterinary Medicine University of Florida, SeaWorld Florida, The Georgia Sea Turtle Center, St Augustine Alligator Farm, White Oak Conservation Center, The Marine Mammal Center and Disney Animal Kingdom and Seas. Following her residency Dr. Rousselet accepted a position as the only veterinarian at the Dublin Zoo in Ireland. She is currently a staff veterinarian at Beauval Zoo in France where she currently reesides.

Dr. Erlacher-Reid completed her residency in Aquatic Animal Medicine at the University of Florida in 2013 and became a Board Certified Specialist in Zoological MedicineTM as a Diplomate of the American College of Zoological Medicine (Dipl. ACZM) in 2014.  During her residency program she provided veterinary support for free-ranging marine mammal and sea turtle rescues and annual health assessments.  Some favorite moments included the opportunity to participate in manatee health assessments in Belize and assisting in the triage and treatment of sea turtles rescued from the Deepwater Horizon oil spill in Louisiana. Dr. Erlacher-Reid also provided veterinary care to a wide range of aquatic and terrestrial species during clinical rotations at numerous zoological facilities including but not limited to: SeaWorld, Florida Aquarium, The Georgia Sea Turtle Center, Georgia Aquarium, White Oak Conservation Center, The Marine Mammal Center, and UF’s Tropical Aquaculture Laboratory. During her residency she investigated the seroprevalence of Leptospira in Florida manatees, intestinal and cloacal strictures in free-ranging and aquarium-maintained green sea turtles, and continued her investigations involving diseases and diagnostics in moray eels that were initiated during her previous veterinary internship at Mystic Aquarium. Following her residency Dr. Erlacher-Reid achieved her dream job as a Senior Staff Veterinarian for SeaWorld, first in San Diego, and now in Orlando where she currently resides.  She continues to support the University of Florida as a primary supervisor for the aquatic animal residency program and continues to present lectures for many aquatic medicine courses offered at the University of Florida. 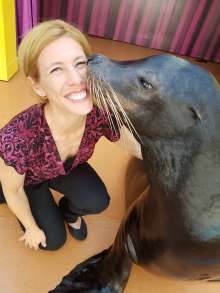 Dr. Croft was the first UF Aquatic Medicine Resident completing her residency in 2007.  She was thrilled to be the ‘guinea pig’ and help lay the groundwork for this amazing training program. During her residency she researched the effect of dietary Vitamin C on the development of Head and Lateral Line Erosion in ocean surgeonfish. Following her residency she secured a Senior Staff Veterinarian position at SeaWorld Orlando where she worked for over 11 years providing veterinary care to all of the diverse animals that live at the park from sharks to sea turtles to dolphins to penguins as well as injured, orphaned, or ill wildlife. During her tenure at SeaWorld Dr. Croft also served as Director of the Animal Rescue Team, Chair of the Animal Welfare Committee, and a regular cast member on the television show “Sea Rescue”.  Dr. Croft has participated in investigations examining the use of MRI for diagnosis of internal fibropapillomatosis in sea turtles, thiamine deficiency in harbor seals, optimizing formula for hand-rearing orphaned manatee calves, cataract surgery in penguins, and the effects of water temperature of dolphin poxvirus.   She recently relocated to Colorado to be closer to family and is working as an independent consultant and relief veterinarian for zoological facilities and small animal/exotics private practices.